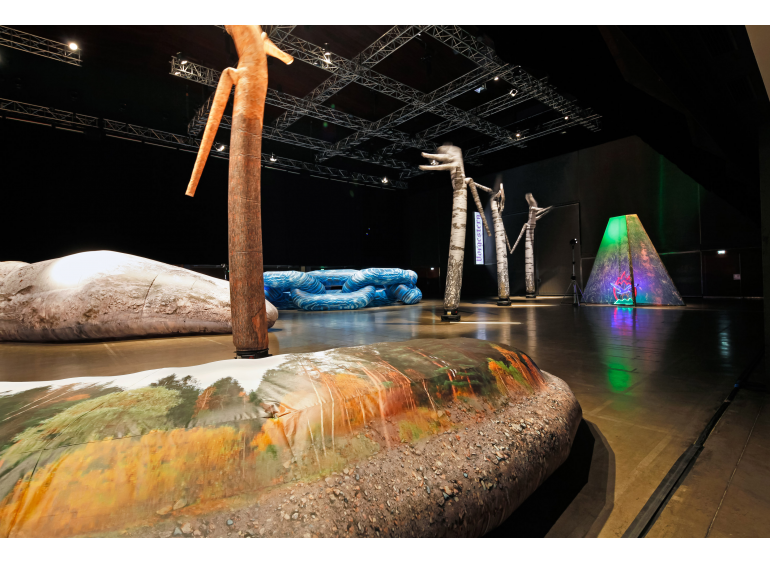 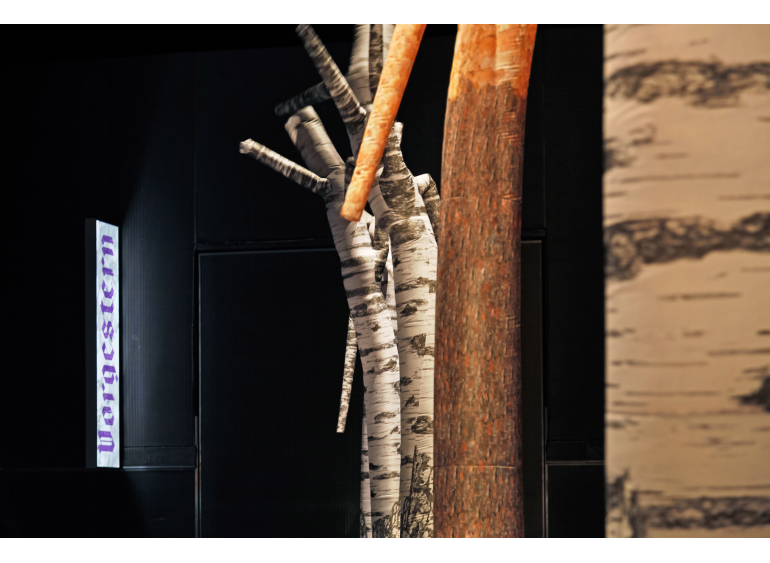 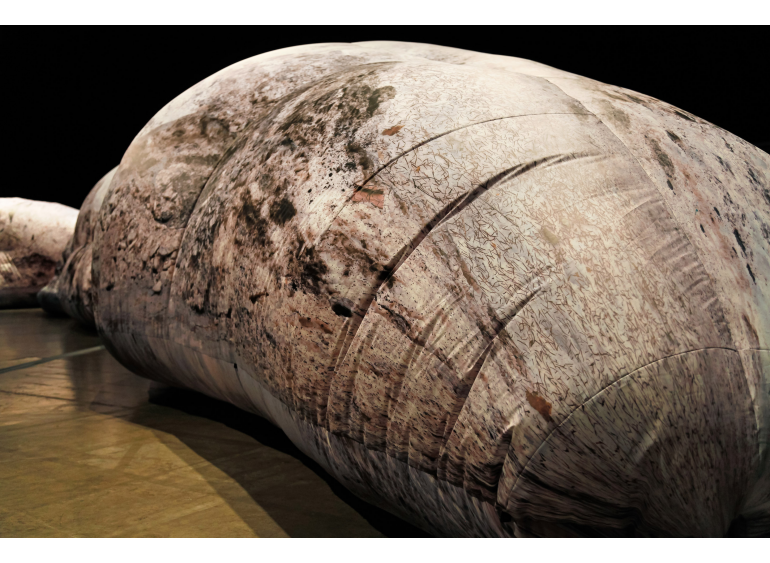 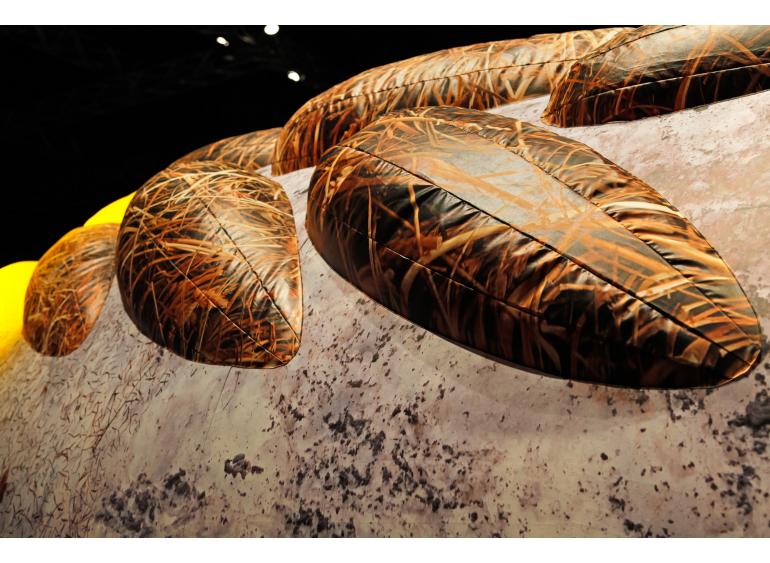 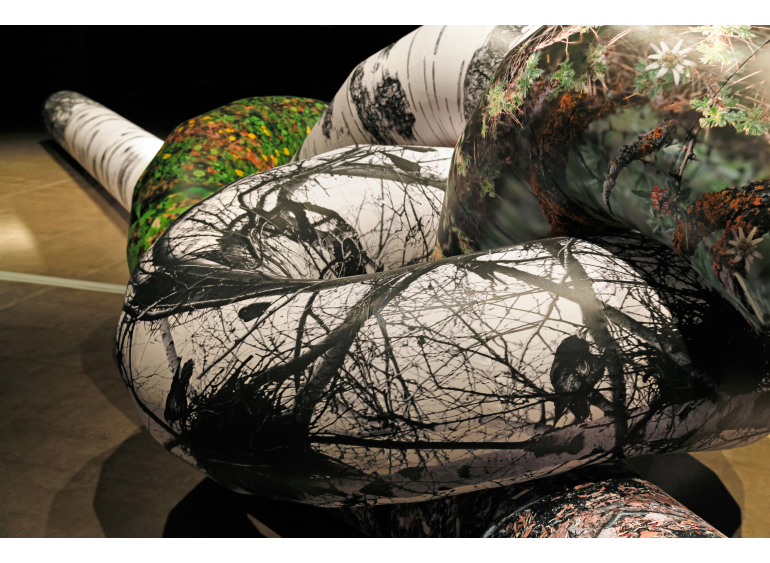 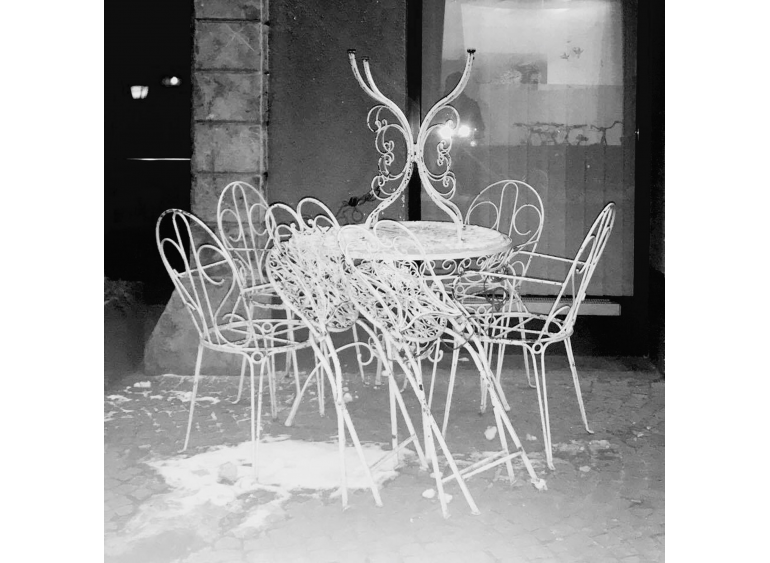 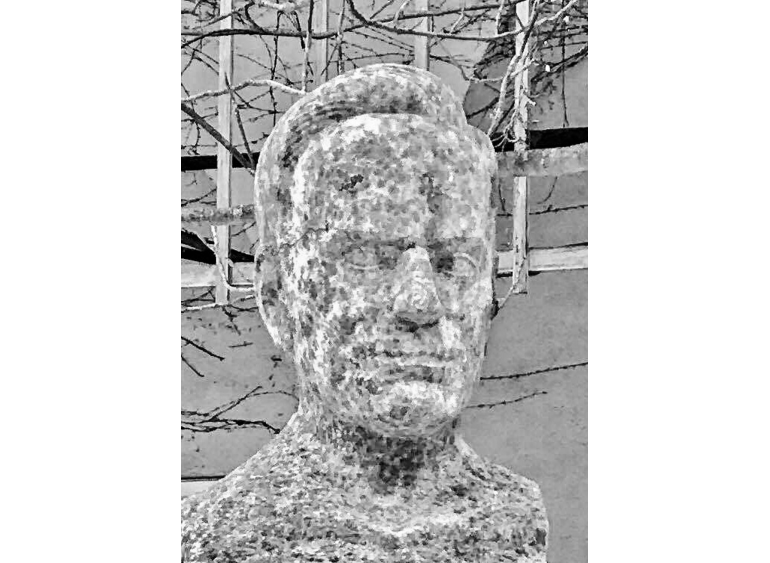 Peter Rosegger, a late 19th- and early 20th-century poet hailing from Styria, may not be a household name outside of Austria, but in his time he was almost as widely read as Jules Verne, selling fourteen million books. His poems about the Austrian nation’s idyllic home in the woods are one of the inspirations behind what could be called a sci-fi Heimat installation by Moscow-based artist Irina Korina. Her ambitious sculptural work often deals with plastic materials and kitschy forms, such as those used in cheap renovations gone wrong. These slouched, indistinct shapes are monstrous lumps in “optimistic,” on-trend colors, and you could encounter them in restaurants and cemeteries alike. Korina is a sharp social observer who documents the wishful thinking of today’s sleek and shiny capitalism. But she does so without animosity and even with a sense of compassion. Her installation in Helmut List Halle also creates a world between blind nature and rational construction. This time, she departs from the propensity of nationalists the world over to adopt and extol the patriotic virtues of all kinds of animals, plants, and trees. Lilies of the valley, chamomiles, cornflowers, and autumn foliage are all held high as symbols of a native homeland—delicate, beautiful, vulnerable things—while it is the clunky stuff—piles of dirt-tinged snow, full parking lots, and veritable forests of glaring advertisements—that is closer to reality. Such is the thinking behind Korina’s installation. Overdimensional sheaths of wheat stick out from under the melted snow, stumps of birch still flutter leaflike in the breeze. The day before yesterday meets yesterday and tomorrow in a greenhouse-like blow-up of the traditional Russian form for the Paskha cottage cheese Easter dessert, standing like a pyramid on its head. It‘s a weird landscape, an inflatable purgatory of hollow rhetorics, naturalizing nationhood. A bespoke attraction that is critical and enticing at the same time, it’s perfect for a Sunday afternoon with the kids.

With the kind support of The Federation of Austrian Industries Styria

Irina Korina (1977, Moscow) is an installation artist with a background in stage design whose sculptures and environments reflect upon the ideological coding of material in times of transition. She lives in Moscow. 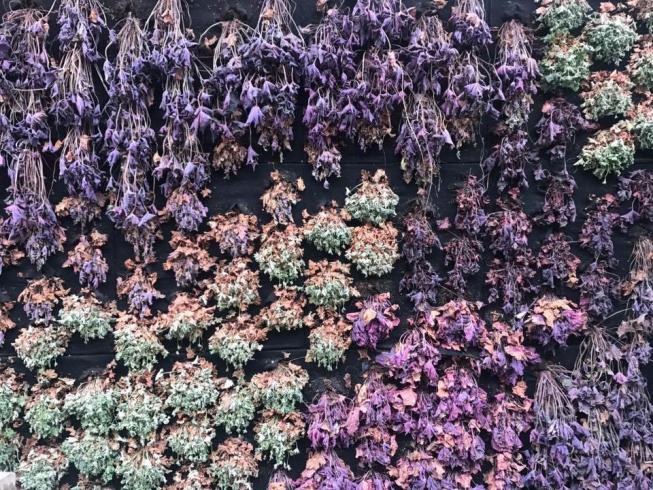